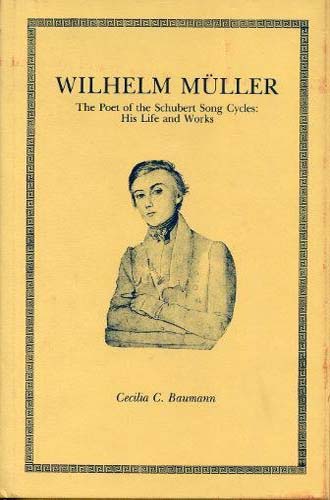 The Poet of the Schubert Song Cycles: His life and works

Considered a German Byron by his contemporaries, Johann Ludwig Wilhelm Müller (1794–1827) is usually remembered today as the German Romantic poet whose lyrics Franz Schubert set to music in Die schöne Müllerin and Die Winterreise. A philhellene who wrote impassioned lyrics in support of the Greeks in their struggle for independence from the Turks, Müller also collected and edited Italian and modern Greek folk songs. Goethe very likely became acquainted with Marlowe's The Tragical History of Doctor Faustus through Müller's 1818 translation of that work.

Müller was an influential critic and scholar of the Romantic Era, a creative public librarian and publisher's consultant (with the prestigious firm of F. A. Brockhaus in Leipzig), a respected teacher, and a popular author of travel books—all this despite his sudden and somewhat mysterious death at 32. The son of a guild tailor in the duchy of Anhalt-Dessau and a precocious and sometimes rebellious student, he nonetheless received lifelong aid from the ducal family, including a scholarship to the new University of Berlin. Müller left the University before completing his studies and spent two years as a volunteer in the Prussian Army fighting Napoleon. During this time, he had an unhappy love affair in Brussels. At 26, Müller married into one of the leading Dessau families, and at 30 he was granted the title Hofrat.

In this first comprehensive study of Müller, Dr. Baumann presents a lively and vivid profile of the poet, prose writer, translator, critic, editor, philhellene, and traveler whose life reflects the landscape of literary concern from the Romantic movement to Junges Deutschland. A complete bibliography of works by and about Müller is included. This work in the words of one reader should interest "any person with a general concern for the complex interrelationship of cultural and socio-political forces and the contact of key persons in German-speaking culture with one another during the late 18th and early 19th centuries . . . as a veritable 'window' into the period of Goethe."