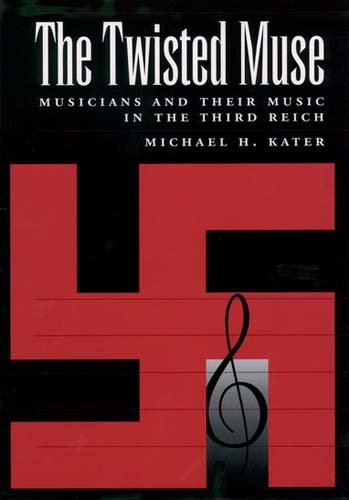 Musicians and Their Music in the Third Reich

Is music removed from politics? To what ends, beneficent or malevolent, can music and musicians be put? In short, when human rights are grossly abused and politics turned to fascist demagoguery, can art and artists be innocent?

These questions and their implications are explored in Michael Kater's broad survey of musicians and the music they composed and performed during the Third Reich. Great and small—from Valentin Grimm, a struggling clarinetist, to Richard Strauss, renowned composer—are examined by Kater, sometimes in intimate detail, and the lives and decisions of Nazi Germany's professional musicians are laid out before the reader.

Kater tackles the issue of whether the Nazi regime, because it held music in crassly utilitarian regard, acted on musicians in such a way as to consolidate or atomize the profession. Kater's examination of the value of music for the regime and the degree to which the regime attained a positive propaganda and palliative effect through the manner in which it manipulated its musicians, and by extension, German music, is of importance for understanding culture in totalitarian systems.This work, with its emphasis on the social and political nature of music and the political attitude of musicians during the Nazi regime, will be the first of its kind. It will be of interest to scholars and general readers eager to understand Nazi Germany, to music lovers, and to anyone interested in the interchange of music and politics, culture and ideology.