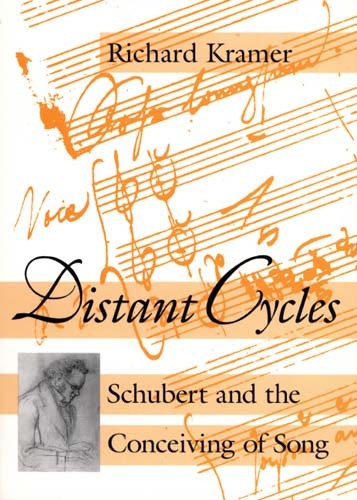 Schubert and the Conceiving of Song

Franz Schubert’s song cycles Schone Mullerin and Winterreise are cornerstones of the genre. But as Richard Kramer argues in this book, Schubert envisioned many other songs as components of cyclical arrangements that were never published as such. By carefully studying Schubert’s original manuscripts, Kramer recovers some of these "distant cycles" and accounts for idiosyncrasies in the songs which other analyses have failed to explain.

Returning the songs to their original keys, Kramer reveals linkages among songs which were often obscured as Schubert readied his compositions for publication. His analysis thus conveys even familiar songs in fresh contexts that will affect performance, interpretation, and criticism. After addressing problems of multiple settings and revisions, Kramer presents a series of briefs for the reconfiguring of sets of songs to poems by Goethe, Rellstab, and Heine. He deconstructs Winterreise, using its convoluted origins to illuminate its textual contradictions. Finally, Kramer scrutinizes settings from the Abendröte cycle (on poems by Friedrich Schlegel) for signs of cyclic process. Probing the farthest reaches of Schubert’s engagement with the poetics of lieder, Distant Cycles exposes tensions between Schubert the composer and Schubert the merchant-entrepreneur.