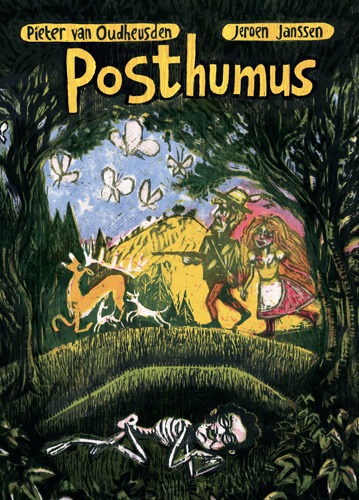 In the house of his brother Ferdinand, the composer Franz Schubert is fighting a losing battle with Death. Ghosts from his past come to haunt him: his greatly admired master Beethoven, his family, his friends and the many women with whom he was secretly and hopelessly in love, the secret police of the Austrian state ... In his feverish brain, his world has turned into a chain of nighmares, each bearing the title of one of his songs and with fragments of their lyrics. It is a dance of death, sometimes grimly humorous, led by Beethoven as the mocking nemesis of Schubert's musical aspirations and personal uncertainties.

Although thorougly documented, 'Posthumus' or 'The Last Days of Franz Schubert' is first and foremost a biographical fantasy, a visual song cycle around the major themes of his life, playfully interpreted from a modern point of view - sometimes willfully anachronistic, but always inspired by love for the man and his music.

Newbould – Schubert: the Music and the Man
Scroll to top