Martin Boykan - The Power of the Moment 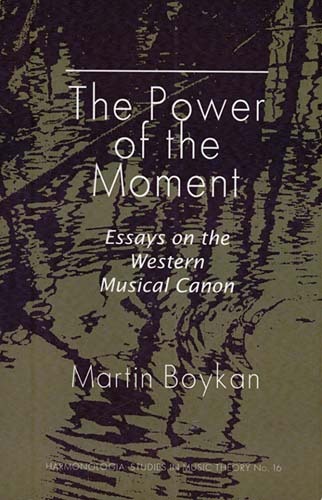 Essays on the Western Musical Canon

A collection of critical essays on some of the most familiar works from the musical canon. Not unlike literary essays by poets or novelists, it pointedly avoids abstract constructs in order to elucidate what it is that we actually experience in the course of a performance. On several occasions alternate versions of a passage are compared to the original to provide a graphic illustration of the composer's intentions.

Two chapters are devoted to Beethoven. The first movement of the Hammerklavier Sonata is compared with the Archduke Trio to explore how markedly similar harmonic plans may provide a basis for two very different kinds of music. A chapter on the scherzo of the Fifth Symphony points to the oddity of an added measure in the recapitulation that may seem too obscure to attract attention, but actually functions as an essential cog in the network of relationships that defines the movement.

Seven songs of Schubert's Winterreise are studied with particular emphasis on the piano introduction and the critical effect of various kinds of dialogue between piano and voice. A chapter on Verdi's Otello examines the immediate musical context of the couple's kiss, which provides a profound insight into the underlying dramatic intention of the opera. And finally, a measure-by-measure analysis of a short piece of Bach illustrates how the complex associations aroused by every phrase can awaken the feeling that everything that happens is important, that every moment is lived to the fullest.