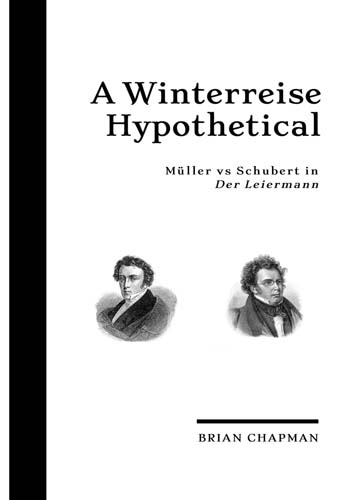 A Winterreise Hypothetical: Müller vs Schubert in Der Leiermann

Abstract: In the final poem of Wilhelm Müller’s Die Winterreise – No. 24 Der Leiermann (The Hurdy-Gurdy Man) – there is a total shift in the poetic psychology.  Whereas the first twenty-three poems give expression to the self-absorbed psychopathological journey of a jilted lover, entirely void of human contact as the protagonist is at first totally focussed on self-pity (in Nos.1-13 of Schubert’s Winterreise), and then increasingly possessed by the desire for death (Nos.14-23), No. 24 is devoted completely to the woeful plight of someone other than the protagonist.  For the first time in the entire cycle, the protagonist focusses on the pathetic situation of another human being – a pitiful, lonely hurdy-gurdy man to whom nobody listens, from whom everyone averts his or her gaze, and whose little plate is always empty as stray dogs growl around him.  Suddenly, in the final verse of this final poem, the protagonist moves from negative contemplation to positive action as he offers hope to the miserable street musician by asking whether the two might now join forces and make music as they travel together.  This is the real sting-in-the tail of Müller’s Die Winterreise – the chance of redemption for the protagonist and a very real opportunity for a new beginning.  Schubert’s setting of No. 24 leaves this sting-in-the-tail musically unremarked and undetectable.  The essay concludes with a suggested re-composition of the accompaniment to the final verse to give expression to the redemptive possibilities afforded by Müller.