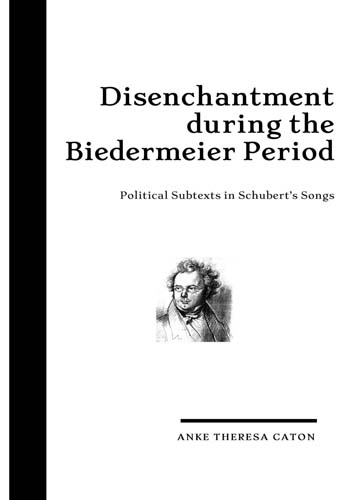 Disenchantment during the Biedermeier Period

Abstract: Even today Franz Schubert is belittled by many music enthusiasts as a typical Biedermeier composer, whose works appear to be of a purely lyrical and innocent character. Schubert composed over 600 songs and his image as a song composer generally fosters the light-hearted and almost naive view of his oeuvre. This thesis will enrich the common view of Schubert and his songs. It will show that some of his apparently innocent songs may bring forward direct political criticism or hold political implications; their seemingly lyrical and innocent appearance turning out to be a clever façade.

The motivation for the political voice in Schubert’s songs is found in the composer’s historical, political and social environment, which will be summarized at the beginning of this thesis. Thereafter, special attention will be drawn to songs by Schubert’s close friend, Johann Mayrhofer. Schubert’s Mayrhofer settings give evidence of a questioning liberal voice. They bring forward different ways in which political criticism can be voiced and show how the composer was willingly engaged with such matter. A look at Schubert settings by poets other than Mayrhofer suggests that political traces can also be found elsewhere in the composer’s song oeuvre.