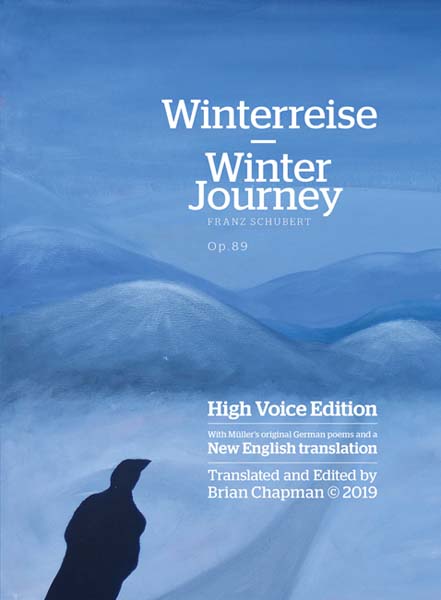 Brian Chapman about his translation of Winterreise: "Translation into English of the rhyming poetry of Winterreise is fraught with difficulties, beginning with the common German idiom of verbal compression – the conflation of multiple concepts into a single compound word. Another difficulty derives from the fact that one is setting new words to old music and, as far as possible, the music has to remain unaltered; in the event, there are a few instances where compromise has had to be admitted, but no more significant than that already present in Schubert’s score where, in successive verses of a strophic song, the text might be articulated across the same melodic phrase with different numbers of syllables. Alignment of stressed syllables with the music’s rhythm has often necessitated a considerable degree of poetic licence in the ordering of words within sentences and phrases. Should this alignment be viewed as compromised in some instances, it should be noted that Schubert did not shrink from using a discordant, wailing three-note phrase in bar 12 of No.6 (Wasserflut – Flood Water) to express the word “Weh” (woe) in the first verse and then using the same anguished phrase to express the preposition “auf” (in) in the second verse. The remaining major requirements have been that the general sense and specific imagery of Müller’s poems should be faithfully mirrored, while his original rhyming patterns should be matched exactly. In publishing this new translation it is a pleasure for me to acknowledge the commitment and support of Nathan Lay whose helpful observations and suggestions have resulted in substantial improvements to my initial draft. I hope that this new translation might help to widen the audience for this wonderful masterpiece."