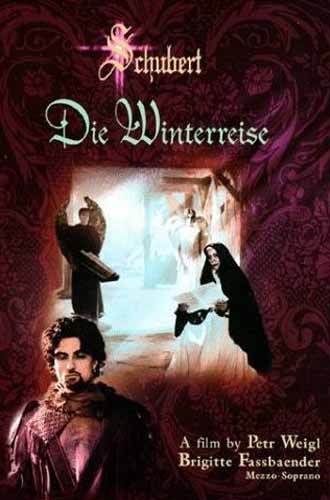 Die Winterreise is not an opera but a cycle of songs drawn from a series of poems and has been called Schubert's greatest legacy in a remarkably prolific career. Completed on Schubert's deathbed, the songs tell a number of emotionally charged, interwoven stories linking the characters, who travel together by carriage on a bleak winter's day in the early 1800s.

Weigl created his film with an eye toward conceptual expression of theme and mood rather than merely illustrating the events of the stories. At times the visual imagery in the film literally follows the words and the music. At other times, the images are more abstract, serving as a counterpoint, or even flow independently of the musical work. The music, as well as the visuals, evoke feelings of fear, grief, loneliness, unrequited love, and futility. Backed by a rhythmic, somber piano score, the vocalist narrates and serves as the voices of the various travelers in this haunting masterpiece.

Schubert is widely hailed as the first of the Romantic composers and a great master of the German “lied”, or song, composing roughly six hundred in his short lifetime. He was equally adept, though not as prolific, in writing virtually every other contemporary form: opera, chorale, chamber music and symphonic works. It was his belief, at the end of his life, that his talent was grossly unappreciated, and commentators believe that this inspired him to set the melancholic poems of schoolteacher Wilhelm Müller to music. Schubert died at the age of thirty-one, and most of his works were not published and many not performed until years, even decades, later.