Some thoughts on learning Winterreise for the first time 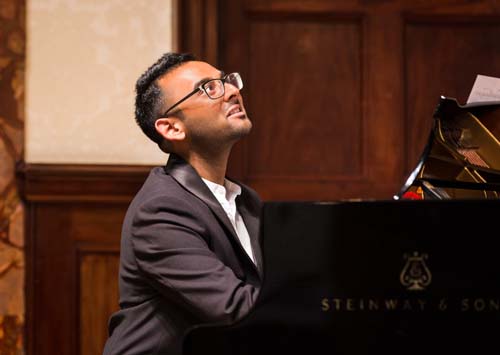 I write this having just given my first performances of Winterreise, with Roderick Williams and Peter Brathwaite. Approaching this pinnacle of the Lied repertoire for the first time presents some immediate challenges - the spectre of famous performances lingers over any interpreter of this cycle, and listeners often bring to Winterreise their own expectations, assumptions and opinions when entering the concert hall. My challenge, then, under such circumstances, was to not be distracted by these difficulties. I needed to resist feeling the weight of these pressures, and the best way to attempt to do this was to engage fully with the interpretative process to find a truly personal and honest reading of Winterreise, and to allow my own vision of the music to emerge with clarity and conviction. In doing so, I hoped to encourage any listener, whether familiar with the piece or not, to experience it afresh.

But how to achieve this? Of course it was impossible for me not to recall the recordings with which I have grown familiar over the years, among them Dietrich Fischer-Dieskau and Gerald Moore, Brigitte Fassbaender and Aribert Riemann, and Jonas Kaufmann and Helmut Deutsch. Each of these duos has drawn my ears and heart to new possibilities in the music, although I confess that I do not have an intimate knowledge of the cycle’s recording history, and my aural memory of the piece is not strongly linked with any one particular performance. This proved to be something of a blessing, as it meant that I didn’t come to Winterreise with such heavy ‘baggage’. Indeed, through the entire process of learning the cycle I consciously chose not to sit down and listen to any complete performance. Rather, I wanted to establish my own relationship with the material (i.e. the music, the poetry, and the fusion of these elements into ‘song’) from the outset, and interrogate the raw ingredients offered to me by Schubert on the page. Spending time away from the piano analysing the music, asking questions of the material in a spirit of open curiosity, allowed me to largely forget what little imprint some recordings had made in my aural memory, and to see the score with fresh eyes (and fresh ears!). This was a liberating experience which allowed me to then enjoy listening to selections from the vast library of recordings of Winterreise - not to find out how the music ‘goes’, but to see how other interpreters had made sense of some of the more elusive songs, constantly asking myself what aspect(s) of the material may or may not have informed their decision-making.

Beyond exploring the individual songs in great detail, perhaps the most challenging aspect of learning the cycle was understanding how to tie the twenty-four miniatures together into a meaningful and cohesive whole. So often in song cycles, cohesion is achieved through narrative - individual songs follow a simple chronological order, charting the development of a character over time. I think of Schumann’s Frauenliebe und -Leben as exemplary in this regard, but also (to a lesser extent, perhaps) Schubert’s first cycle to poems by Müller, Die schöne Müllerin. My desire to find some kind of cohesion in Winterreise was so strong at the start of the learning process, because I had found such unity in other cycles. However, as I became more familiar with the material, it struck me that I might be misleading myself - or, at least, thinking of ‘cohesion’ from an unhelpful angle.

The narrative of Winterreise is less easy to grasp than that of Frauenliebe or Müllerin. In the poems of Winterreise, Müller constantly plays with temporality, and Schubert’s ordering of the songs creates further challenges with regards to pinning the cycle down to a single linear narrative. Indeed, it seems to me now that Müller and Schubert’s handling of time and space in the cycle (How far does our wanderer travel? Where does he end up in the final song? How long has this journey taken him?) is deliberately fragmentary and non-linear, and that this is a structural way of reflecting the psychological state of the protagonist. For me, the lack of clear narrative progression, the geographic non-specificity of the songs, and the constant push-pull between past, present and future timeframes mirrors perfectly the distorted vision of the wanderer himself.

This is not to say that the cycle isn’t cohesive, but rather that cohesion is achieved through other means. I found myself being more and more aware of the musical and textual connections between songs, with shared motifs, tonalities and language unifying the songs under a single perspective. The extent to which such connections can be heard by a first-time listener is probably limited, but as a performer I started to make links between the songs through physical sensation - for example, I began to physically associate the way in which the opening right-hand gesture of ‘Der Leiermann’ traverses the same intervallic space (a diminished fifth) traced by the left hand in the opening bars of ‘Erstarrung’. Similarly, the semitone oscillation at the start of ‘Die Wetterfahne’ finds its way into ‘Erstarrung’, ‘Der Lindenbaum’ and ‘Die Krähe’ (among others!), and my perception of how all of these songs share so much material led me to think of ‘cohesion’ in a more flexible sense. In rehearsal, Roderick and I discussed the disjointed narrative of the piece, and how dream-like it feels in its sudden shifts of mood and colour. So often in dreams, the familiar and the everyday appear in unexpected places, but we don’t question their logic; in the world of dreams, fluid shifts of time and space are made to feel natural. It is this sense of the distorted becoming natural that I have come to lean into in order to understand Winterreise more intimately.

For the protagonist, a sense of fragmentation and confusion are part of the way he experiences the world. Likewise, it is through this lens of dislocation that I have cultivated my relationship with Winterreise. It has offered me a new way into the poetry and the music, and I look forward to many years of refining, deepening, and challenging my understanding of this masterpiece.

END_OF_DOCUMENT_TOKEN_TO_BE_REPLACED

Tiliakos & Varvaresos in conversation with Dominy Clements
Scroll to top