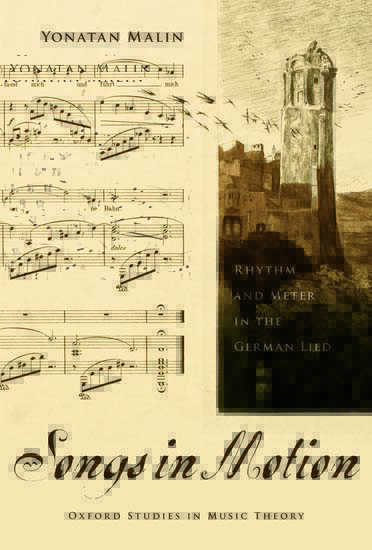 Rhythm and Meter in the German Lied

Abstract: Song in Motion: Rhythm and Meter in the German Lied explores rhythm and meter in the nineteenth-century German Lied. It illustrates the transformation of poetic meter into musical rhythm and situates songs within larger aesthetic and historical narratives. The Lied, as a genre, is characterized especially by the fusion of poetry and music. Poetic meter itself has expressive qualities, and rhythmic variations contribute further to the modes of signification. These features often carry over into songs, even as they are set in the more strictly determined periodicities of musical meter. A new method of declamatory-schema analysis is presented to illustrate common possibilities for setting trimeter, tetrameter, and pentameter lines. Degrees of rhythmic regularity and irregularity are also considered. Recent theories of musical meter are reviewed and applied in the analysis and interpretation of song. Topics include the nature of metric entrainment (drawing on music psychology), metric dissonance, hypermeter, and phrase rhythm. The book provides new methodologies for analysis and close readings of individual songs by Fanny Hensel née Mendelssohn, Franz Schubert, Robert Schumann, Johannes Brahms, and Hugo Wolf. Whereas songs by Hensel, Schubert, and Schumann may generally be described as musical settings of poetic texts, songs by both Brahms and Wolf function as musical performances of poetic readings. The frequently mentioned differences between Brahms and Wolf are clarified, along with deeper affinities. Songs by both Brahms and Wolf may be understood as musical performances of poetic readings, and in this regard they both belong to a late period of cultural history.