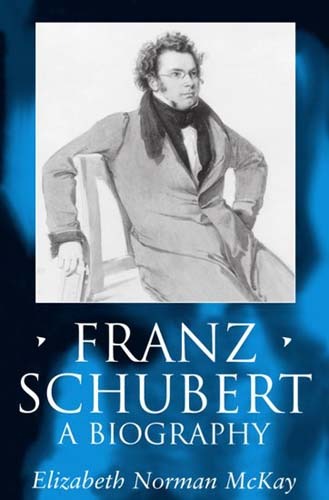 Franz Schubert (1797-1828) was born in Vienna of immigrant parents. During his short life he produced an astonishing amount of music. Symphonies, chamber music, opera, church music, and songs (more than 600 of them) poured forth in profusion. His 'Trout' Quintet, his 'Unfinished' Symphony, the three last piano sonatas, and above all his song cycles Die Schöne Müllerin and Winterreise have come to be universally regarded as belonging to the very greatest works of music. Who was the man who composed this amazing succesion of masterpieces, so many of which were either entirely ignored or regarded as failures during his lifetime?

In her new biography, Elizabeth Norman McKay paints a vivid portrait of Schubert and his world. She explores his family background, his education and musical upbringing, his friendships, and his brushes and flirtations with the repressive authorities of Church and State. She discusses his experience of the arts, literature and theatre, and his relations with the professional and amateur musical world of his day. Schubert's manic-depressive temperament became of increasing significance in his life, and McKay shows how it was partly responsible for his social inadequacies, professional ineptitude, and idiosyncracies in his music. She examines Schubert's uneven physical decline after he contracted syphilis, traces its affect on his music, his hedonism, and sensuality, and investigates the cause and circumstances of his death at the age of thirty-one.