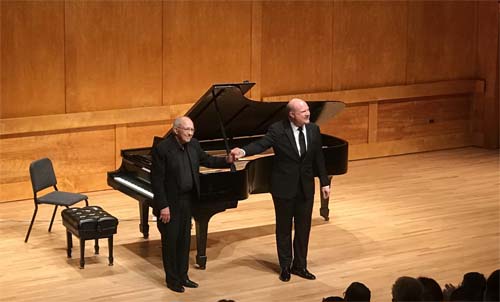 Standing alone in Schubert’s tiny “Death Apartment” in Vienna, it is not hard to imagine the last days of the composer’s life. Suffering with the later stages of Syphilis, Schubert’s doctor recommended he move in with his brother Ferdinand, where his family could better look after him. There are several accounts of the dampness and cold in which the great composer wrote his last songs and chamber works and prepared the second half of Winterreise for publication. These last works are shaded with both darkness and light, with despair and the possibility of redemption -- and as so often with Schubert, the heartbreaking, momentary shift to major for reflection on what could have been.

Historians frequently discuss the lack of a female lead in Schubert’s own story. His adolescent crush on Therese Grob seems to have been only that, and his close relationships with gay men (Johann Mayrhofer and Franz von Schober, for example), whether sexual or not, were often stormy. Standing at just over five feet tall, his portly figure netted him the nickname “Schwammerl,” or “little mushroom,” and surely the Syphilis symptoms of red flush and patchy hair loss did not help his situation. His jovial disposition and talent earned the affection and admiration of his circle of artistic friends, but he otherwise seems to have lived a solitary life on the fringe of society. It is not such a stretch to imagine that Schubert felt a kinship with the unhappy wanderer of Winterreise.

Throughout most of his life, Schubert seems to have found refuge in his close friends, literature, a good glass of rosé, and in writing music. Living in the shadow of Beethoven, few could believe there was another titan, albeit a gentler one, living in Vienna at the same time. Schubert scraped by as a composer, at last earning enough money to buy his first proper piano just a few months before he died.  His extended forms and surprising modulations did not endear him to some of the Viennese public at the time, but led to a new synergy of words and music, and the development of true art song. His love for literature, and perhaps more importantly, his understanding of which poems would be heightened by music, sustained him. Even in his last days, when he no longer cared to eat, he asked his friend Franz von Schober to bring him book after book.

Schubert found some of his greatest inspiration in the poetry of his contemporary, Johann Ludwig Wilhelm Müller (1794-1827).  The poet likewise had dreamed that someday a “kindred spirit” might come along and “hear the tunes behind the words.” Unfortunately, the two never met – but what depth and beauty has been passed down from the union of their arts. Müller’s poetry has its inspiration in the seemingly polar opposites of Byronesque Romanticism and humble folksong.  This combination must have resonated with the gemütlich, cusp composer, whose writing itself espouses the poise of the Classical period with the chromaticism, passion, and self-reflection of the Romantic era.  Schubert worked and reworked the Winterreise section of Müller’s Gedichte aus den hinterlassenen Papieren eines reisenden Waldhornisten, taking license to reorder poems as he saw fit. He presents us with a clear musical and emotional path for the journey.

Schubert guides us through the cycle of songs with a deft, nearly expressionist take on Müller’s haunting words. Using an economy of notes that fully express regret, joy, horror, irony and deepest sadness, the composer allows little room for sentimentality. Schubert’s markings and instructions to the performers may be few, but are specific and potent. Rarely has an accent or portato carried such psychological weight.

Winterreise starts in a dark place and quickly seeks out even bleaker regions. A despondent young man chooses to leave town after a breakup with his beloved. The young couple was serious enough to have spoken of love, and marriage had been considered. Originally from another town, the young man ever felt a stranger. And so, he decides to leave at night, when there is less chance for an encounter with the young lady, or for derision from others. As he passes her home, he pauses to write “good night” upon the gate, so that she will know he thought of her as he left.

What follows is a journey through a barren, wintry landscape.  As is typical of Romantic poetry, the outer world largely reflects the inner world of the wanderer.  We encounter musical depictions of fickle weathervanes, frozen rivers hiding surging currents, a linden tree’s whispering branches, mocking predatory birds, as well as hope, as a trembling, withered leaf in the wind.  As our wanderer’s state deteriorates, a cemetery is perceived as a full, unwelcoming inn, and three suns seem to appear in the frozen, arctic sky. Finally, on the outskirts of a small town, the wanderer meets a lone, destitute musician, the Leiermann, or hurdy-gurdy player.

There are many interpretations of the role of the hurdy-gurdy player in Winterreise. Even after many years of living with this song cycle, the haunting drone that is the basis of this song can still make one catch their breath. The unkempt hurdy-gurdy player is often seen as representing Death, who has until now eluded the wanderer on his journey. Sometimes, the poor musician is interpreted as a vision the wanderer has of himself –- what he has become, living on the edge of society, begging with his music to stay alive.  The hurdy-gurdy player is also the first person our wanderer encounters for whom he has empathy. Perhaps his reaching out to this strange, old man represents a new beginning, a reaching out to humanity.

The wanderer’s journey ends with two questions: “Strange old man, shall I go with you? Will you turn your hurdy-gurdy to my songs?” The musician does not answer with words, but with an excited swell, followed by a sparse, hushed, minor cadence.

END_OF_DOCUMENT_TOKEN_TO_BE_REPLACED

Stanisław Kierner: Beauty based on simplicity
Scroll to top