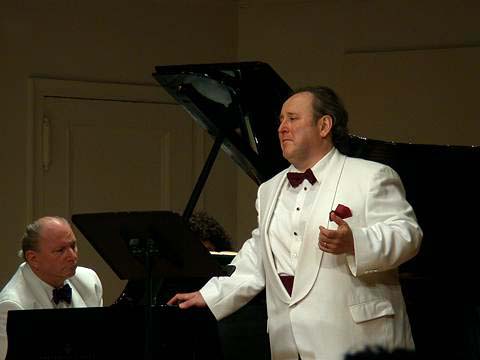 Every time I have the extraordinary good fortune to study and perform “Winterreise”, I am struck by the total genius of Schubert’s marvellous cycle. The secret of the cycle is always present, yet always illusive and, perhaps, may never be fully realized.

But illusive or not, one must arrive at an interpretation if one is to do justice to this greatest of song cycles. So, while fully embracing the cycle’s historical context (which has been superbly dissected by both pianist Graham Johnson and baritone Dietrich Fischer-Dieskau), I would take this opportunity to discuss our interpretation of “Winterreise; an interpretation which both pianist Jerome Rose and I feel is a truly collaborative effort.

Since WWII, there has been an ongoing thesis that states: The horror and magnitude of that war (not to mention those that have followed), militates against allowing Romantic music to be just that – romantic. Therefore, the artist is obliged to make a more cynical statement or to change his interpretation from the personal to one of pure allegory.

This, in our opinion, is false. Schubert’s story is real. It is the timeless story of a man who loves a woman who does not return that love. We do not know why; what precipitated the estrangement, or, indeed, if the love affair is real or imagined. What we do know is that the man chooses a path that will lead inexorably to his demise, if not necessarily by the end of the cycle.

A naïve point of view? Most definitely not. Unlike many other artists, I purposefully delayed performing the cycle until my later years. That is to say, after I had experienced the kind of personal loss that affected Müller’s traveller so significantly. In my own case, I had a good friend who was fast committing suicide through alcoholism. One day I asked him “Why are you doing this to yourself?” He proceeded to explain that he had met the love of his life in college … and had then lost her. He did not care to go on. He could not recover his equilibrium. And, finally, he wanted to hasten his demise.

He said to me “I am going down a path from which no one can follow.” Of course, at the time, I did not understand the deeper meaning of his words. Then I found them in “Winterreise”: ‘Eine Strasse muss ich gehen, die noch keiner ging zurück.‘ At that moment I realized what my interpretation of these songs must be. (I am aware that my friend’s words do not reflect the literal translation of the German, but they contain the meaning of the phrase from the heart.

These thoughts on “Winterreise” are not new. In fact, such thoughts often informed the prevailing interpretations before WWII. One need search no further than the excellent interpretation of Richard Tauber, upon whose unique view Dietrich Fischer-Dieskau admittedly built his own. And, of course, the superb and very present recording of Hans Hotter during the war years in Berlin 1942-43 (which brings to mind the stunning opening scene from Polanski’s poignant film, The Pianist).

I hope that Jerome and I have been able to bring to fruition our experience of “Winterreise”: one that elucidates and honours the timeless collaboration of poet Wilhelm Müller and the magnificence that is Franz Schubert.